Donuts anytime. You’ve been craving donuts all day. No matter where you were you thought you saw them. In the rolls of paper at work, in the traffic-jammed tires on the way home.

Donuts seemed to be anywhere you went. But as you finally pop off your shoes, you think, “I could really do glazed donuts right now. Are night donuts a thing? Or are donuts just for breakfast?”

If you want to know if donuts are just for the AM, read on.

Are You Craving the Sweetness? 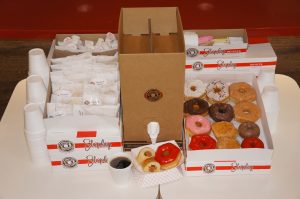 You’ve been working for hours and with the way things are going, it’s not even close to over yet. This project has to be perfect and you know it’s nowhere near that.

“I know we have to keep working,” one group member groans. “But I just can’t.”

They’re right. You can’t ignore it. Everyone in the group, you included, is slumped over about to fall asleep in their chairs. Either these library chairs are comfier than they should be, or you need a boost. That’s when you pull out the Doordash app.

“Alright, I’m getting Shipley Do-Nuts. Who’s in?” Suddenly everyone perks up.

The Meet and Greet 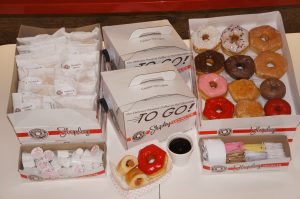 You’re really nervous. This is your first time in student council. You never thought you’d run, let alone win, but here you are – about to lead the very first student council meeting of the year. As you think about what to do for the first meeting your vice president says, “Why not get some donuts!”

“Donuts? We’re not here to talk glaze and stuff our faces. We’re here to make changes!”

“Trust me,” your VP says. “We have all year for that. But let’s make this first meeting a nice meet and greet. You know, sip a little coffee, have a little donut…get to know each other. It makes things easier for when you want support later.”

“And donuts will do that? I mean, how would we even get the donuts now? It’s past breakfast!”

“Hello! You can get donuts anytime! They’re not just for breakfast anymore, you know. Plus, we don’t even have to leave school grounds. They’ll come to us!” You smile. You knew there was a reason you ran with her as VP.

“Okay, let’s do it,” you say. By the end of the meet-and-greet everyone is laughing. Taking a bite of a cake donut you think, “Maybe this will work out after all…”

Yes, You CAN Get Donuts Anytime!

Anytime is a good time for Shipley’s filled donuts. 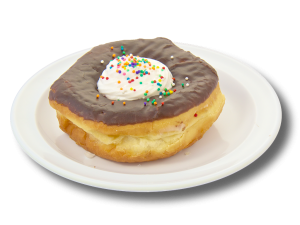 You finally did it! After years of hard work, you can finally afford to hire an employee. There’s just one problem. You have to do the interview after hours and you’ll both need a little something to break the ice. You don’t want to offer a full-blown dinner, yet you feel you should something since it’s a late interview.

“Nah, I want something that sets the company apart. Something that shows working with me will be relaxed, but fulfilling.” And that’s when it hits you. Why not offer filled donuts?Like the classic Boston cream. The applicant doesn’t have to take it, but at least it will signal that you bring a little extra to the table. All because you know that anytime is a good time for Shipley’s filled donuts. 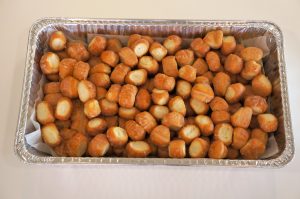 It’s that time of year again, the yearly writing group potluck. You don’t have any time to bake anything, much less pick at the novel you’ve been writing. And yet you know going with no writing to share, or food, would not be good.

You’re about to not go at all when your roommate says, “Why not bring some donut holes. Shipley’s has party platters FULL of ’em. And when the stories get bad you can practice tossing donuts holes in your mouth. Or toss them at the commentators you don’t like. Like that guy who doesn’t get your pop culture references.”

You chuckle, “That’s not how it works. But I do like the idea of donut holes. Something about just seems right.”

“Of course it’s right,” your roommate says. “It’s donuts from Shipley. You can’t get any more right than that.” 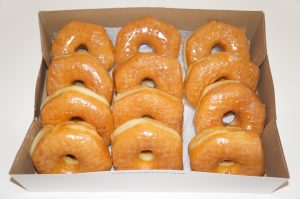 You and your friend are hanging out after a hard week of work. It’s the first time in a long time you’ve gotten to relax with your best friend.

“Me, too,” they agree. “I want something sweet, but…not waffles.” You both wrack your brain for something when you suddenly blurt out, “Donuts! We can get a dozen for like nothing and pig out!”

“Uh, hate to burst your glazed-covered dreams there, Sherlock,” your friend says. “But it’s nighttime. Donuts are clearly a morning food.”

“Well, it’s not like waffles are served with filet mignon,” you charge.

“I believe you’re forgetting chicken and waffles. It’s a classic that can be served anytime.”

Then, while your friend puts on another show to watch, you slyly order the donuts. The dozen is delivered within the hour. As you put the donuts on the coffee table you say, “Pay up.”

Get Donuts Anytime With Shipley

We’ve been making delicious donuts since 1936. If you’re craving the donuts anytime, or just want a taste of Houston, click below to order Shipley Do-Nuts or come by our two locations today. We have all types of donuts from caked to glazed, kolaches, and let’s not forget our French Quarter beignets.

Are Donuts Just for Breakfast? | My Shipley Do-Nuts – Houston, TX

Stay up-to-date on special events, get valuable coupons and another FREE gift on your birthday! Please complete the mandatory fields for gifts and coupons to be valid. Good exclusively at our 12403 Westheimer and 1001 McKinney locations.